Natrona County is a county located in the U.S. state of Wyoming. As of the 2010 census, the population was 75,450,[1] making it the second-most populous county in Wyoming. Its county seat is Casper.[2]

In 2010, the center of population of Wyoming was located in Natrona County, near Alcova.[3] 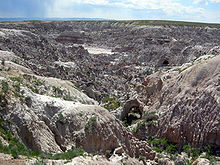 The board consists of five members who are each is elected to a four-year term, which is staggered so not more than three commissioners are elected at the same time. Elections for the County Commissioners occur at the General Election every two years.Natrona County is governed by the Board of County Commissioners who meet in the county seat of Casper.

Natrona is a strongly Republican county. In 2016 Donald J. Trump received 70.6% of the vote, the highest vote total of any presidential candidate since at least 1960.[17]